The current structure of Office of the Attorney General is approved by the Royal Civil Service Commission on 28th June, 2016. 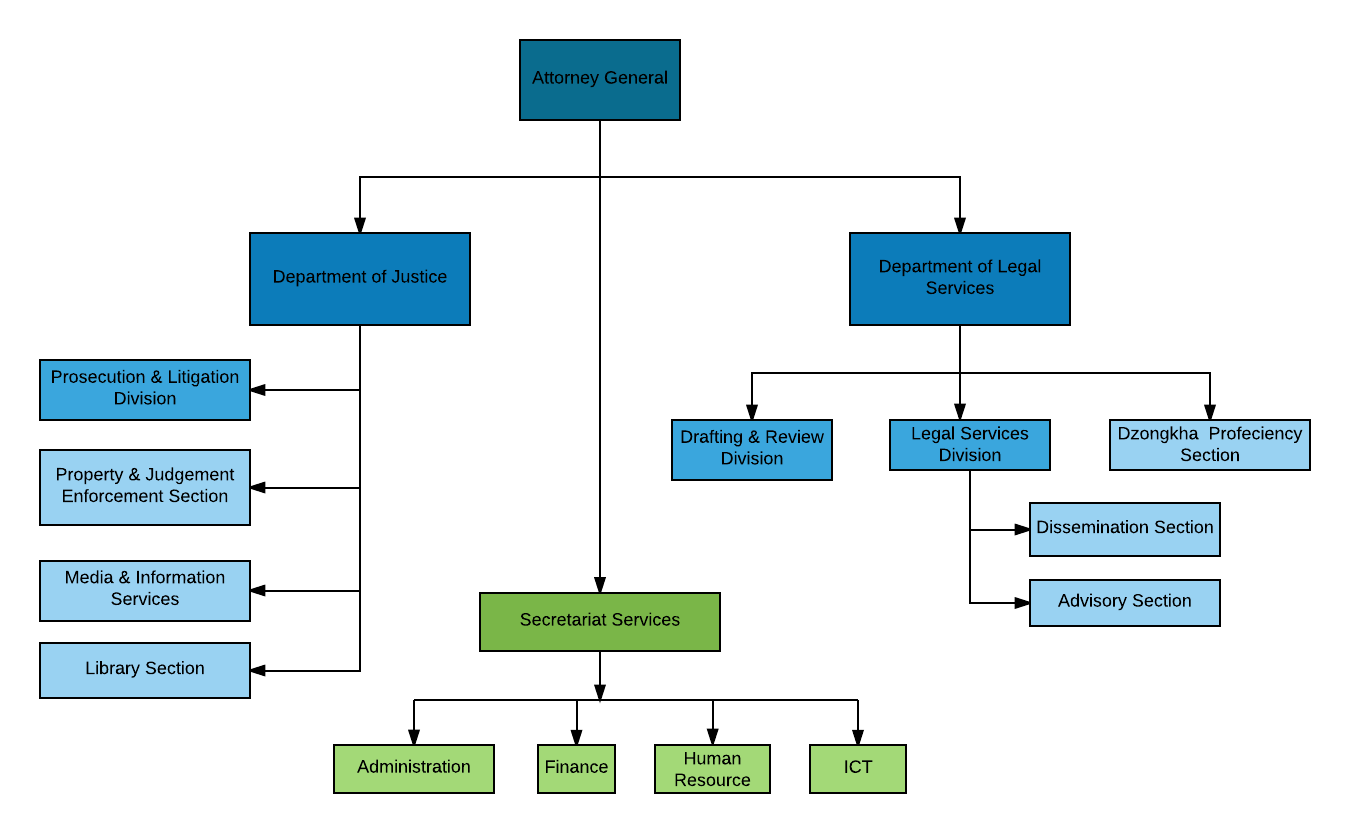 Saddled with the maximum workload of the office, this Division has the maximum number of lawyers. The assignment of a major chunk of legal work force to it is designed to address the OAG’s concern for freedom of those involved in a case from unjustifiable interference. Hence, the “utmost diligence” is the rule this division plays by. Accordingly, when a prima facie case is found to exist, the case is then put through “Evidential Test” and “Public Interest Test”.

Evidential Test requires not just an evidence of an offence but evidence sufficient to convict the accused. In other words, the evidence must be such that any reasonable judge would, without compunctions, hold the accused guilty.

On the other hand, Public Interest Test requires that even if there are evidence sufficient to convict the accused, the prosecution of which would have adverse implication on the public, for instance by disturbance of the order or undermining the security, the prosecution would not be launched. It thus follows that OAG does not initiate prosecution until and unless it is found imperative in public interest and is convinced that it has all the evidence to convict the accused.

To guide the decision on prosecution and the processes thereafter, OAG has codified for itself the Prosecution Guidelines. Although initiated as an in-house initiative, it is a landmark achievement for OAG in its efforts to ensure fairness and justice.

The Drafting and Review Division has the Drafting Section and the Review Section. It is headed by an Assistant Attorney General.

The Drafting Section looks after the drafting of bills referred to it by the Royal Government for which the ministries/ agencies concerned must furnish clear policy guidelines and support to the Office for drafting of the bills. In this task, the ministries/agencies are also required to designate in writing an official who will be a liaison officer between the agency and the OAG and also to facilitate the Office in drafting of the bills. The Division also drafts other legal instruments.

The Division may constitute Committees as and when required for its functions.

The principal function of the Legal Services Division is to render legal services and opinions on matters of law and such other issues assigned or referred to it by the Druk Gyalpo or the Royal Government. It is also the duty of this Division to provide legal education to legal personnel, and disseminate information to enhance awareness of laws among the general public. It is headed by an Assistant Attorney General.

The Division provides a wide range of legal services to the Royal Government and its agencies on the matters pertaining to both international and the domestic laws. It does not render legal advice to individual citizen; it may provide general information to the public and facilitate the public in obtaining copies of statutes and laws.

The legal opinion sought from the Office of the Attorney General should be in writing and any oral communication of the Office shall not be treated as legal opinion. Such writing shall contain a concise statement on the subject matter with other documents and materials which are necessary.

It is also the mandate of the Division to provide legal education to legal personnel in the country. Specifically, it will endeavour to update the latest global legal issues among the legal personnel.

Other core function of the Division is to disseminate information to enhance awareness of laws among the general public. Particularly, the Division has a vision to create awareness among the young people who are most vulnerable to conflict with the laws. The Division aims to achieve this by coordinating with the Ministry of Education.

The Division also aids and assists the Prosecution Division to carry out prosecution works, and also facilitates the Royal Government agencies by becoming member of the investigative Committee or body whenever the state agency deems appropriate on ad hoc basis.